Washington state voters will likely get to weigh in on police use of deadly force. A ballot measure on that subject turned in around 360,000 voter signatures Thursday afternoon. That should be more than enough to qualify for consideration by the Washington Legislature and then probably go to the statewide ballot in 2018.

Washington currently has one of the highest thresholds in the nation for criminally charging police officers who use deadly force. They are protected as long as they act in “good faith” and without malice. In recent history, county prosecutors in Washington who reviewed controversial police shootings invariably declined to charge any of the officers involved.

Initiative 940 would allow prosecutors to charge a police officer after a deadly shooting using a new "good faith" standard and it calls for ongoing de-escalation and mental health training for officers.

Relatives of people who died in confrontations with police marched triumphantly through the rain to the beat of tribal drums to deliver boxes of petition signatures to the Washington Secretary of State's office.

"The state of Washington has spoken. Enough is enough,” Johnson said. “There is enough blood that has been spilled on these streets and it stops today. We got 360,000 signatures so our loved one's death will not be in vain," she said to cheers.

Police officers guilds strongly oppose this initiative. They argue it would change Washington's standard for prosecution of officers from one of the most protective in the country to one that is highly subjective and "least protective.”

"We feel strongly that changing the Use of Force Law will not reduce violent interactions between law enforcement and the public," Washington Council of Police and Sheriffs President Craig Bulkley wrote in a public letter. "In fact, it could cause more violence as it ties the hands of police officers, troopers and deputies, and could cost lives."

"I-940 is bad for communities. It is NOT about training, it's only intent is to put officers in JAIL," the Seattle Police Officer's Guild tweeted earlier this month.

Sisters Uyen Le and Xuyen Le, whose nephew Tommy Le was shot and killed by a King County sheriff's deputy in June, argued that current policing and accountability policies cannot be allowed to continue.

"Had there been this Initiative 940—de-escalation tactics, the standards for use of deadly force, mental health and first aid training—many innocent lives would have been spared," Uyen Le said at the signature delivery march. 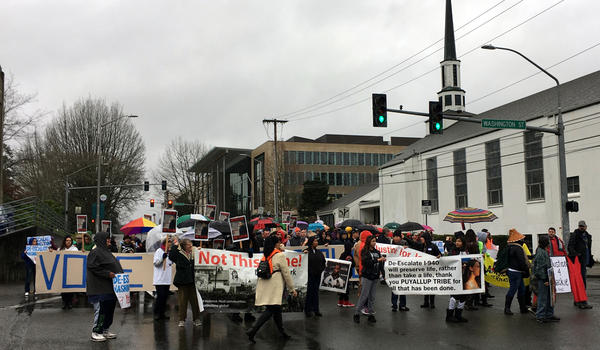 Because the I-940 campaign turned in well over the minimum 260,000 voter signatures required to qualify a statewide initiative, the Secretary of State's office can do a random sample check of the signatures. That could take up to a month to complete.

Washington state lawmakers rarely pass initiatives to the Legislature into law themselves or present alternatives. Legislators punted to the voters on the past 13 initiatives that came before them dating back to 1995.

Leaders of De-Escalate Washington, the campaign organization for I-940, would like for their initiative to be approved during the 2018 legislative session, but realistically expect to be punted to the November ballot.

I-940 was one of 70 initiatives to the legislature filed with the Washington Secretary of State this year. The other proposed measures covered a multitude of different subjects from marijuana regulation and health care to car tab fees and term limits for local government officials.

State Elections Division staff do not expect any other campaigns to turn in petitions before Friday's deadline.