Some of the closest races in Washington state have been called in the days following the 2022 midterm elections. Here's what happened over Veteran's Day weekend:

Democratic U.S. Rep Kim Schrier has won a third term in Washington’s 8th U.S. House district, fending off a challenge from Republicans who targeted the seat as part of their efforts to flip the chamber.

Schrier, a pediatrician, is the only Democrat to have held the seat since the district was created in the early 1980s. She defeated Matt Larkin, a lawyer, abortion rights opponent and former Washington attorney general candidate who painted her as too far left.

Schrier stressed the results she’s achieved in office, including helping win road money for the agricultural town of Wenatchee, which will help bring the region’s apples, pears and cherries to market, and getting the city of Roslyn, best known as the setting for the TV show “Northern Exposure,” support for projects to reduce the risk of wildfire.

Wenatchee's Republican mayor, Frank Kuntz, endorsed her in a campaign commercial, helping blunt Larkin's assertion that Schrier was an extreme liberal out of step with voters.

“I am thrilled that our work to bring down costs, protect a woman’s right to choose, and support local police resonated with people across the 8th district,” Schrier said in a written statement Thursday night.

Democrats won a second key House race in Washington state Saturday — an open seat in a conservative region that long evaded the party.

Marie Gluesenkamp Perez, an auto-shop owner who describes herself as an independent-minded Democrat, pulled off a victory against Joe Kent, a far-right “America First” ex-Green Beret who was endorsed by former President Donald Trump, in southwest Washington’s 3rd Congressional District.

“I am humbled and honored by the vote of confidence the people of Southwest Washington have put in me and my campaign," Gluesenkamp Perez said in a statement.

The 3rd District, which narrowly voted for Trump in 2020, had been represented for more than a decade by Republican Rep. Jaime Herrera Beutler. But she failed to make it through the state’s top -two primary after angering conservatives with her vote to impeach Trump following the attack on the U.S. Capitol by his supporters.

By flipping the 3rd District, which Democrats had not held since former Rep. Brian Baird retired in 2010, the party will now have eight of Washington’s 10 congressional seats. Herrera Beutler won 22% of the vote in the primary, and how her voters split between Gluesenkamp Perez and Kent may have been the deciding factor in the race.

Gluesenkamp Perez — who co-owns an auto shop with her husband just across the Columbia River in Portland, Oregon — said that as a small business owner who lives in a rural part of the district, she was more in line with voters than Kent, who repeatedly had to explain his connections to right-wing extremists.

Gluesenkamp Perez supports abortion access and policies to counter climate change, but also described herself as a gun owner who opposes an assault rifle ban, though she does support raising the age of purchase for such guns to 21. She wouldn’t be a “typical Democrat” in Congress, she said.

Kent, a former Green Beret who is a regular on conservative cable and podcasts, has called for the impeachment of President Joe Biden and an investigation into the 2020 election. He’s also railed against COVID-19 shutdowns and vaccine mandates and has called to defund the FBI after the search on Trump’s Mar-a-Lago home for classified documents.

Democrat Steve Hobbs has prevailed in the race for secretary of state, the first time a member of his party has been elected as Washington’s chief elections officer in six decades.

In an interview with KNKX, Axios reporter Melissa Santos, who moderated a debate between the two candidates, said Hobbs' win would be like "getting all the chess pieces" for Washington state Democrats.

Republicans were shut out of the state’s top two primary in August.

Hobbs, of Lake Stevens, was appointed by Democratic Gov. Jay Inslee last November to replace Republican Secretary of State Kim Wyman after she took an election security job in the Biden administration.

While his appointment marked the first time a Democrat held the office since the mid-1960s, Hobbs had not yet faced voters. This election determined who serves the remaining two years of Wyman’s term.

After Republicans failed to advance a primary candidate, the state Republican party endorsed the write-in campaign of Republican Rep. Brad Klippert, although his name didn’t appear on the ballot. Unlike Wyman, who lauded the state’s election system and security, Klippert echoed election fraud conspiracies and wants to end the state’s mail voting system.

Hobbs, 52, said his experience while in office — including overseeing a statewide primary and two special elections — should give voters the confidence to let him finish the next two years.

Anderson, 57, had been Pierce County auditor for nearly 13 years.

She had touted her endorsements, which included over two dozen county auditors from various political backgrounds, two Democratic members of the state Senate, and former Republican Secretary of State Sam Reed. Running as a nonpartisan, Anderson wanted to make the job independent from political party affiliations.

In addition to overseeing the state’s elections, the secretary of state’s office also registers corporations and charities and manages the state archives and state library, among other duties. 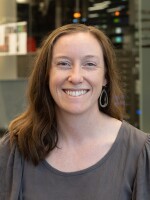 Cara Kuhlman
Cara Kuhlman is KNKX's online managing editor. Prior to KNKX, she worked at Seattle-based technology and business news site GeekWire for six years. A University of Oregon graduate, she's also studied narrative nonfiction writing and journalism entrepreneurship.
See stories by Cara Kuhlman
The Associated Press
The Associated Press (“AP”) is the essential global news network, delivering fast, unbiased news from every corner of the world to all media platforms and formats. On any given day, more than half the world’s population sees news from the AP. Founded in 1846, the AP today is one of the largest and most trusted sources of independent newsgathering. The AP considers itself to be the backbone of the world’s information system, serving thousands of daily newspaper, radio, television, and online customers with coverage in text, photos, graphics, audio and video.
See stories by The Associated Press