The Ramsey Lewis Trio became a fixture on the Chicago jazz scene. Steve Edwards navigates through the musical road map of jazz pianist, three-time Grammy winner, and NEA Jazz Master Ramsey Lewis, who successfully crossed over from the jazz to other genres.

In 1965, Ramsey Lewis’ took the elegantly funky, Grammy award-winning Dobie Gray song “The In Crowd,” and made it a crossover hit. It became a cultural phenomenon. Won the Grammy for Best Instrumental Jazz Performance and featured the hard swinging - classic - Ramsey Lewis Trio. The version still stands today as an enduring, joyful celebration of the song.

The journey that led to that musical moment began in Chicago in 1935, when Ramsey Lewis Jr. was born into a musical loving family.

Growing up in the Cabrini Green housing project he began taking piano lessons at four and played at church, where his father was choir director. Ramsey Sr. was a big jazz fan who played lots of Duke Ellington and Art Tatum at home and took his son to concerts and encouraged Ramsey to embrace that music.

While a freshman in high school, saxophonist and pianist Wallace Burton, a fellow church musician, asked Ramsey to join the Clefs, a septet of collegians that blended jazz and R&B.

At the outbreak of the Korean War, the military draft claimed several members. The three who didn’t get drafted—included Lewis, bassist Eldee Young, and drummer Redd Holt. They formed what would become that classic Ramsey Lewis Trio.

In 1956, they released their first album, Ramsey Lewis and His Gentlemen of Jazz. Three years later, the trio were invited to perform at Birdland in New York. That three-week engagement led to performances at the Newport Jazz Festival, the Village Vanguard and recordings with Max Roach, Clark Terry, and Sonny Stitt.

The trio followed up with two more chart-toppers, including “Hang on Sloopy.”

After Young and Holt left to form their own group, Lewis continued in the trio format with a new bassist, Cleveland Eaton, and future Earth, Wind & Fire drummer Maurice White. The 1966 album Wade in the Water gave Lewis his third U.S. hit single.

Lewis experimented and expanded on electronic keyboards. A high point was his 1974 album Sun Goddess, produced by White and featured members of Earth, Wind & Fire, his brother Verdine on bass and vocalist Philip Bailey. The recording established Ramsey Lewis as a fusion music icon.

He reunited his original trio for one album in 1983 and throughout his illustrious career, worked with countless other artists to create new and innovative music. Including Nancy Wilson, the London Philharmonic Orchestra and Dr. Billy Taylor.

In the mid '90s, the crossover group Urban Knights was formed featuring Lewis on keyboards, saxophonists Grover Washington Jr. and Dave Koz and guitarist Earl Klugh. In 2005, he returned to his gospel roots, and recorded with the group “With One Voice.” All during this time, Lewis hosted weekly radio and TV shows called Legends of Jazz with Ramsey Lewis, airing across the country.

In his late 80s, Lewis connected with younger generations. His monthly Saturday Salon livestream series, produced during the pandemic by his wife Jan, was critically acclaimed. His album, “The Beatles Songbook: The Saturday Salon Series, Volume One,” was drawn from the performances.

“The In Crowd” single was inducted into the Grammy Hall of Fame, and his personal memorabilia reside at the Smithsonian Institution. Lewis was also honored as a NEA Jazz Master by the National Endowment for the Arts.

Composer, musician, educator and ambassador for music at large. We have more to look forward to from the artist who died this year – with a memoir and albums due for release in 2023. 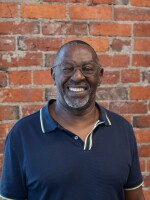 Steve Edwards
Originally from England, Steve has deep roots in jazz and soul and started on-air hosting at BBC (Radio1) JazzFM in London before moving to the US. His work on-air as a host and producer at KOAS and public radio jazz station KUNV earned him induction into the Nevada Broadcasters Association Hall of Fame.
See stories by Steve Edwards