Graduating from college comes with its own unique set of challenges. Add a global pandemic, impending recession, and the looming consequences of climate change, and it becomes another beast altogether.

College students graduating in the 2022-2023 school year will soon transition into the “real world,” but when they graduate, they also face new complications for which the rule book remains to be written. More than 10,000 University of Washington seniors are among the many facing this new reality.

Here's how three seniors are thinking about the future as they enter 2023.

'I was robbed of my college experience'

Aditi Krishnan, a global health and French major, is a senior at UW, and the majority of her time in college has been under the shadow of the COVID-19 pandemic.

As a college freshman in 2019, she was sent home with the rest of her class two weeks before the end of her winter quarter. At first, she said she expected to be back to school in a mere couple of weeks, a sentiment echoed by her fellow classmates. But due to the pandemic, this is her first full year in-person at UW — and her last.

“I honestly say it all the time, I was robbed of my college experience,” said Krishnan. “College is kind of the first time you get to challenge all the opinions you grew up with, stand on your own and become your own person, and it’s just not the same experience when your college is spent in quarantine.”

Reflecting on her own experience in college, she said graduation felt like it snuck up on her. She said she does not feel prepared for life after graduation, and attributes much of that uncertainty to the isolating and detrimental impacts of spending such formative years facing a global pandemic.

“I feel like I still have a lot of growing I wanted to do before I was at this age,” said Krishnan. “I wanted to feel more prepared going into early adulthood and I think that’s why graduation doesn’t feel real to me. It snuck up on me, and I feel like I really needed that time. Instead, I am going to be thrown into the workforce at maybe a 19-year-old maturity level instead of a 22-year-old maturity level.”

See the world or be financially secure before it changes?

Cornell plans on graduating in spring quarter. After that, her plans are uncertain. With many impacts from climate change already being irreversible, students face an uncertain world. Cornell plans to make the most of it before it’s too late.

“[Climate change] makes me nervous about entering the workforce right away, because who knows how long we’ll be around to see the beauty that goes on on our planet,” said Cornell. “I want to travel before I get a solidified job but it’s hard to know what’s best. You want to get a job because everyone’s getting a job and you want to be financially free, but you also want to be able to see and experience the world at the same time.”

Asad Tacy took an opposite stance on how climate change impacts his plans for the future. Instead of focusing on taking time to explore the world before committing to the workforce, he plans to jump into corporate life head first.

“I think there’s a decent chance that in my lifetime I’m going to see the world change for the worse. I probably am more concerned with making money, quickly, than I would have been if I wasn’t worried about climate change,” said Tacy. “As with most things, whether you have access to resources is going to be really important if the worst of people’s fears do come to pass.”

Tacy, a finance major, plans to move to New York and work for a strategy consulting firm following his graduation in the spring. Tacy also attributed the climate crisis to impacting his decision to major in finance.

“I may have even majored in something else, had it not been for climate change,” said Tacy. “My financial concerns and their associations with ongoing climate issues definitely played a part in me deciding to go into the business school and majoring in finance.”

A global pandemic and the climate crisis have been on the minds of students for a few years now, but more recently, many have begun to grapple with the possibility of a recession in the coming years.

Although the United States is not currently in a recession, high levels of inflation, hiring freezes, and layoffs do not bode well for the future. These recent trends are forcing students face the possibility of decreased job opportunities and economic instability.

For Margaux Clarke, the economic uncertainty influenced her choice to apply to grad school. As an environmental studies major and member of the university’s women’s soccer team, Clarke decided to pursue higher education and a continued sports career over pursuing a professional career right out of college.

“There’s definitely a lot of fear – I’m trying not to think too much about the future beyond grad school,” said Clarke. “Doing a master's degree and continuing with athletics kind of postpones being in the real world. I do want to play professionally abroad after school, and in my mind, none of that is a part of joining the real world. With that being said, there’s definitely a lot of fear – I don’t know what it’s going to be like to get a job after that.”

However, there is hope yet for this year’s graduating class in the eyes of Troy Bonnes, an academic advisor in the Department of Communications.

“A lot of students are questioning if they are ready to not be a student anymore, whether they really have the skills necessary to be successful in a work setting. They often think they don’t have the right hard skills or enough professional experience,” said Bonnes.

“Most employers are really just looking for people who are professional, competent, and teachable. They look for people who will show up and work hard and operate ethically. Most of this is present in the students getting ready to graduate. I think most students drastically underestimate their readiness.”

The class of 2023 faces an uncertain world, as do the students who come after them. Only time will tell what happens next, and what new challenges will evolve for future generations of college students. Good luck, class of 2023. 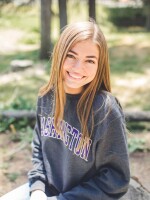 Maggie Piper
Maggie Piper is a senior at the University of Washington studying Journalism and Political Science. After growing up in California, she moved to Seattle for college and has worked to develop her skills as a journalist and student. She writes for the Husky Media Group, a university paper, and following graduation, hopes to pursue a career in political journalism or law.
See stories by Maggie Piper