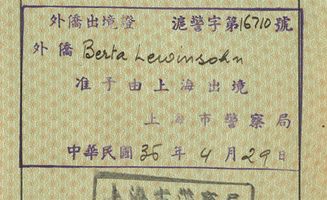 A Chinese visa issued to Berta Lewinsohn, a German Jew.

Hear from a panel of survivors of the Shanghai Ghetto. At least 20,000 Jews of German, Austrian, and Czech origin escaped to Shanghai, China before the outbreak of World War II. Shanghai was the only place in the world that did not require an entrance visa to those fleeing Nazi persecution. The Seattle area and the Holocaust Center for Humanity’s Speakers Bureau are proud to include Shanghai survivors. Several will share memories on a moderated panel, along with historical context, visuals, and artifacts. Join us for these fascinating first-hand accounts of the Jewish refugee experience in Shanghai. Bring your own lunch, coffee and cookies provided