The story of jazz in 2022: A year-end listening party

Jazz was all over the place in 2022. I mean that as a compliment, and with an intended double meaning: We saw some great examples of improvisers flowing through the culture, and we also heard compelling sounds across the broadest spectrum of styles. Which is one reason to balk at any list purporting to capture the definitive Best Jazz of 2022 – instead of doing that here, we asked a handful of keen listeners for their advocacy picks: one album and one song worth shouting about. —Nate Chinen

When people talk about Cécile McLorin Salvant, they often hail her interpretive daring — a natural focus, in light of the extravagant insight she keeps bringing to other people's songs. But can we stop for a moment to marvel at Salvant the songwriter? Ghost Song invites us to do just that, with its healthy balance of original gems. "Moon Song" isn't the most attention-grabbing of them, but it centers so many of her favorite themes: impossible yearning, obsessive craft, the illusion of control. "If you should love me / Don't ever tell me," she begins, over a harmonic progression that feels instantly familiar. What to make of this vulnerable yet guarded instruction? Like the song's key metaphor, it's warm and welcoming, but with a faraway glow. Listen here.

By now, critical consensus has anointed Makaya McCraven's In These Times the runaway crossover wonder of 2022. It appeared on my own top albums list, and on many others; its charms are abundantly clear. For our confab here, I'd like to herald an album conceived in the same spirit and harnessing many of the same energies, but with hazier and somewhat headier results. Guitarist-composer Jeff Parker is one of McCraven's longtime collaborators, and his Mondays at the Enfield Tennis Academy shares some DNA with McCraven's breakthrough In the Moment, from 2015. It's groove-forward but non-ingratiating, with a dynamic that puts pure creative potential in the hands of every musician in Parker's band: alto saxophonist Josh Johnson, bassist Anna Butterss (whose own work made another of our year-end lists) and drummer Jay Bellerose. An immersive listening experience that never settles on one version of the truth. Listen here.

Endea Owens, "Where the Nubians Grow"

This has been a year of cultivation for Endea Owens: Through her initiative The Community Cookout she sows seeds of hope in New York, providing monthly meals and pop-up concerts for her neighbors. As one of the few women instrumentalists in a late-night television show band, she plants seeds of inspiration into young women musicians globally. Her Tiny Desk Concert with her band, The Cookout, opened with an original composition dedicated to her hometown of Detroit called "Where the Nubians Grow." It's an undeniable groove that personally embedded a seed of perseverance within me to push through the final quarter of 2022. Listen here.

The Baylor Project, The Evening: Live at APPARATUS

One of the coolest memories I have of this year is experiencing a night of performance in the heart of Koreatown in Manhattan. I entered a building, took the elevator up to the fourth floor to what had been the home of a lighting design studio – before its conversion into an intimate jazz club called "Mums." I was invited to enter through lush, chocolate-velvet curtains that gave way to a room filled with pink and golden chrysanthemums; little wonder that what came out of that evening yielded this now Grammy-nominated album by The Baylor Project. The breathtaking vocals of Jean Baylor, supported by the embrace of her husband, drummer Marcus Baylor, and their stellar band made everyone in attendance feel like they were in on an intimate secret. Listen here.

Ezra Collective, "Victory Dance"
Earlier this year, the U.K. jazz band Ezra Collective dropped "Victory Dance," the first single from the band's album Where I'm Meant To Be. Led by drummer and bandleader Femi Keleoso, the group plays an infectious mix of many genres, but here the Afro-Cuban rhythms and influences are upfront and peppy. It's a happy, energetic song that starts with a cool percussion vamp and moves into the catchy melodic line played in unison by Ife Ogunjobi on trumpet, James Mollison on saxophone and Keleoso's brother, TJ, on bass. Joe Armon-Jones comes in soon after to keep the fire going with his genius keyboard artistry. (You can also watch them play a Tiny Desk version.) Listen here.

Eliane Elias, Quietude
Before producing her recently published Tiny Desk Concert, I spent a lot of time digging into pianist, singer and composer Eliane Elias' remarkable archive which includes her latest release, Quietude. Though an outstanding composer in her own right, for this record Elias chose to include some beautiful bossa nova standards, with works by many great Brazilian composers including Antonio Carlos Jobim and Dorival Caymmi. The arrangements are exquisite, the sound is luxurious and the performances by Elias and her fellow musicians are marvelous. Listen here.

I realize I'm cheating a bit – this isn't jazz, per se – but I haven't been able to stop playing Mejiwahn's "Lumaby" from his incredible album Beanna, released this year. In it I hear the roots of salsa and bossa nova, a light and breezy groove seemingly made for warmer climates. To me, it's a song rooted in the tradition of Gal Costa. I've been shouting out Meji all year. This song and album should be required listening. Listen here.

Certain albums tend to emulate weather, and Dezron Douglas' Atalaya just feels like the fall. There's a chill to it, a level of cool evoking the convergence of traditional and contemporary New York jazz. To me, Atalaya sounds like a late-night set, when the creative freedom takes over and the buttoned-up essence of the 8 p.m. show gives way to after-hours experimentation. Blurring the boundaries of free jazz and hard bop, Atalaya balances restraint and release with the utmost precision, lending to an album that settles and propels equally. Listen here.

The most auspicious debut album I heard this year — Sweet Tooth, from bassist, singer and composer Mali Obomsawin — nods to both the familiarly freeing legacy of Ornette Coleman's mid-20th-century quartet and to lesser-known declarations of independence: the sounds, songs and ideas of Maine's Wabanaki people. Obamsawin connects these histories with power and ingenuity. "My people have had to innovate endlessly to get our stories heard," she has said – which is pretty much jazz's story, right? Listen here.

The year in jazz

Suraya Mohamed
Suraya Mohamed is a three-time Peabody Award-winning producer, sound designer and editor. She currently serves as the project manager for Jazz Night In America and is a contributing producer on the Alt.Latino podcast. She also produces NPR's holiday specials package, including Tinsel Tales, Hanukkah Lights, Toast Of The Nation, Pink Martini's Joy To The World: A Holiday Spectacular and most recently Hamilton: A Story Of US. You'll also find her work on the Tiny Desk series as either a producer or engineer.
See stories by Suraya Mohamed
Nate Chinen
See stories by Nate Chinen
Larry Blumenfeld
Marcus J. Moore 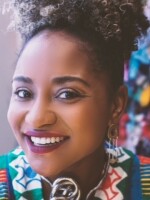 Keanna Faircloth
Keanna Faircloth began her career in broadcasting in 2003. In 2018 she created the podcast, Artimacy, which she describes as a platform, "where art and intimacy meet." The podcast is a two-hour program that spotlights music from Jazz to Soul, and beyond, and features artist interviews airing every Saturday and Sunday at 8 p.m. ET on DC Radio 96.3 HD4. Most recently, she served as the host of Afternoon Jazz on WBGO 88.3 FM in Newark, NJ. While at WBGO, Keanna created and produced the widely acclaimed interview series, The Pulse.