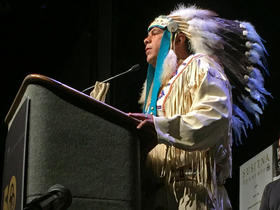 JoDe Goudy, Chairman of the Yakama Nation, was denied entry to the U.S. Supreme Court Tuesday. Goudy almost always dons his traditional regalia with purpose for important occasions, and a visit to the highest court in the U.S. is no exception.

But diplomacy didn’t seem to sway a security guard outside the Supreme Court.

“So, the court is not to be subject to outside influence… the headdress itself will not be allowed inside the courtroom…” said a security guard, in a video posted by Goudy to social media.

The guard told Goudy there were “decorum issues in the courtroom” and his headdress could obstruct the view for others. Chairman Goudy called the experience ‘dehumanizing.’

“I wouldn’t say it was an outright show of disrespect," he said. "I think there is probably some misinterpretation and misunderstand with regard to what our traditional attire and regalia means to us what it would mean to a person who wears a headdress to essentially ask them to remove it," Goudy said.

He was in Washington, D.C. to hear arguments in a case dating back to 2013 that questions the rights outlined in a 163-year-old treaty signed between the Yakama Nation and the United States.

The question before the court is whether a unique travel clause in the Yakama’s Treaty allows members of the tribe to transport goods on state highways in Washington state tax free. Goudy refused to remove his headdress, so he was forced to wait outside until arguments were over.

Last year, the Washington state Supreme Court granted the Yakama Nation the right to transport goods and services across state lines without taxation. Attorneys and tribal members called it a landmark case for tribal sovereignty. Now the U.S. Supreme Court has agreed to review it.