Polarizing, cool, and in your face — jazz and hip hop are similar that way. Terae Stefon takes a look at the history and connection for Jazz Appreciation Month.

Polarizing, cool, and in your face — jazz and hip hop are similar that way. Hip hop even now is considered today's pop music, parallel to jazz from the '30s to the '50s.

Both genres are also Black American art forms, and began as outlets for artists to share and highlight the many joys and pains that come with being Black in America.

From the melting pot of cultures in early New Orleans, decades later, hip hop was born out the cultural mix in New York, when in the '70s the city was in economic collapse. The same city that Black, Puerto Rican, and Caribbean youth turned despair and racial barriers into creative outlets including an emerging hip hop and breakdance movement.

The most notable pioneers of hip hop were:

Kool Herc, who played percussive sections of recordings using a pair of turntables. By playing two copies of the same record and switching between them, the extended section would later become known as the break.

Grandmaster Flash and his band had a unique style of trading off lyrics between four rappers and blending them all in with his inventive DJ skills. Kind of like jazz musicians trading musical bars during their solos.

And the Sugar Hill Gang brought hip hop to the forefront, best known for their 1979 hit single, “Rapper’s Delight,” which was also the first hip hop single to rank in the top 40.

These artists grew up listening to and being influenced by their parents’ jazz records. Even some jazzers began to mix hip hop in with their sound including jazz trumpeter Tom Browne.

In 1979, his tune “Funkin’ For Jamaica” captured the party vibe of early hip hop, and keyboardist Herbie Hancock released “Rockit” in 1983 on his album "Future Shock," giving a whole new vibe to his sound, as he used turntable breaks, and scratching.

Ten years later, groups like A Tribe Called Quest and Digable Planets were drawing heavily from these classic jazz recordings.

The Tribe, with rapper Q-Tip, were also one of the pioneers of classic east coast hip hop jazz, sampling artists from Roy Ayers to Joni Mitchell. Heralded as the "Sgt. Peppers of Hip Hop," The Tribe enlisted legendary jazz bassist Ron Carter to perform on their 1991 album "Low End Theory."

In 1993, London-based group Us3 released "Cantaloop," sampling Herbie Hancock’s recording “Canteloupe Island." That thrust Blue Note Records back on major airwaves, thanks to the growing genre of hip hop.

By 2003, we see the tree of jazz growing deeper roots. One super-group recording was created by trumpeter Roy Hargrove with his project, titled the "The RH Factor." He collaborated with rappers Q-Tip and Common, and singers D’Angelo and Erykah Badu. Artists who, in the hip hop world, are akin to Coltrane and Davis, Nat Cole and Lady Day. Simply put, these are now are legends in the game.

Twenty years ago, when Blue Note opened the vaults, they led the way to legitimize sampling, offering modern producers like Madlib and Makaya McKraven a chance to explore. In 2003, Madlib released "Shades of Blue," featuring a cover of Bobby Hutcherson’s "Montara."

From the beginnings of hip hop to the latest evolution of hip hop jazz, the genre is in good hands. Here’s Makaya McKraven’s latest album, "Deciphering The Message," where he covers Kenny Burrell’s "Autumn In New York." 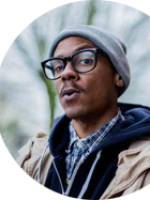 Terae Stefon
Born and raised in Seattle, Washington, Terae Stefon looks to make his mark on an ever changing city. A Graduate of Franklin High School, he then attended Saint Martin’s University, majoring in English and Journalism. Terae found his way into radio by volunteering at local community radio stations HollowEarth and Rainier Avenue Radio in Seattle and then at Total Traffic, keeping the region moving as a traffic reporter and producer. Terae’s excited to get back into music radio with Jazz24 and KNKX as well as dusting off his writing chops to share stories about the music, the artists and beyond. You can currently catch Terae during the week on Jazz24 and special projects on KNKX.
See stories by Terae Stefon
Latest From NPR News
Related Content