Beloved vocalist Billie Holiday made you feel what she was singing

As part of Black History Month, KNKX is highlighting figures who’ve made their mark in the rich world of African American jazz and blues culture. That list wouldn’t be complete without Lady Day. Here’s Paige Hansen with a story on Billie Holiday.

Born in 1915 Elenora Fagan, Billie Holiday — nicknamed “Lady Day”— was a beloved American jazz singer who worked at her craft for the majority of her life.

She was known for her horn-like vocal stylings as you can hear on “Tell Me More and More and Then Some.”

She was especially beloved for her style of singing the blues. Some said she had a way that made you feel like she knew exactly what she was singing about.

And some lyrics were personal: in her 1956 autobiography, Holiday pointed to the infidelity of her first husband as inspiration for the song “Don’t Explain.” When he began to explain away lipstick on his collar, Holiday said “Take a bath, man; don't explain."

Billie has the distinction of singing a stingingly poignant song written by a Jewish teacher, Lewis Allen, and his wife. They protested racism in America and, in particular, the lynching of African Americans. The song is “Strange Fruit,” dubbed "a declaration of war ... the beginning of the civil rights movement."

As a songwriter, Billie drew heavily from her own life. In her autobiography, “Lady Sings the Blues,” she said it was an argument with her mother over money that led to the song “God Bless The Child,” when her mother said, “God bless the child that's got his own." 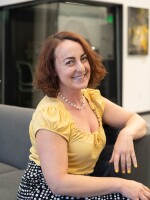