Federal officials revoked the permission today they had given to Oregon and Washington to trap and kill sea lions on the Columbia River. But Rob Manning reports it may be just a temporary move.

The Humane Society of the United States is battling the two states and the federal government in court over the propriety of killing sea lions to save salmon. Government officials say there are doubts about whether the latest federal authorization was given properly – because the states hadn't requested new authority.

Now, the National Oceanic and Atmospheric Administration, or NOAA, is withdrawing that permission. But Jessica Sall with Oregon's Department of Fish and Wildlife says her agency will ask again for permission to remove sea lions.

"I know that we will be asking for very similar authority. Whether or not that's the decision that's finally made by NOAA will be up to them."

Sall says NOAA has told Oregon it could have a decision by next February – in time for the anticipated arrival of sea lions, next year. 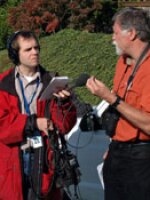