The Seattle MLK Jr. Coalition marks 40 years and marches on

The group is made up of community organizers and representatives from the business and labor sectors. They hold events each year under a unifying theme, including a march and rally in King's honor. The theme for 2023 is "40 years of continuing King's mission."

The coalition's Abiel Woldu said while King's dream of equality and racial justice hasn't been fully achieved, progress has been made. He said the coalition views its work in the same way — hoping to see advancement each year.

"I think that was what was what Dr. Martin Luther King really wanted to see," said Woldu. "I think that's what all of our members want to see and I really hope that's the kind of energy that we're putting out into the community.

The Seattle MLK Jr. Coalition also organizes a series of community workshops. This year's topics include diffusing situations without calling police, a discussion of reparations and a conversation about race with members of the University of Washington football team.

On Monday, the group will host an in-person "opportunity fair," bringing together employers and potential employees. It is part of the coalition's work focusing on economic justice, which King advocate for in speeches and campaigns.

"We try to tailor the event so that there are roles for everybody, whether you have a criminal history, whether you need help writing your resume. We have a resume clinic where someone will sit down and walk you through that process," said Woldu.

Monday's events are being held at Garfield High School in Seattle. It was one of King's stops when he visited the city in 1961.

Also Monday, the Northwest African American Museum re-opens to the public for the first time since the start of the pandemic. It's hosting activities Monday until 8 p.m.

King County, where Seattle is located and the most populous county in Washington state, was officially renamed in honor of King in 2005. It is the only jurisdiction named in honor of the civil rights leader, according to the county.

KNKX has compiled a list of other various MLK Jr. Day events. 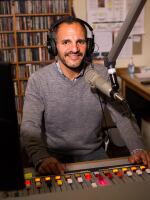