Pharoah Sanders has become synonymous with "spiritual jazz." Carl Pogue remembers the NEA Jazz Master and suggests if you’re only familiar with his free jazz, you’re missing out on an important part of his expressive career.

In 2022, the jazz world said goodbye to a powerhouse saxophonist. Pharoah Sanders employed a forceful, multi-phonic approach to his delivery that showcased him overblowing at times, and playing many notes at once.

And while he’s likely most known for his more avant-garde and free jazz work in the ‘60s and ‘70s, he recorded some of the most exquisite ballads I’ve ever heard in the ‘90s, and continued casting a wide net right up to the end of his life. He collaborated with musicians from around the world, in various genres.

You sometimes hear people refer to much of Sander’s work as “spiritual jazz.” And that's understandable. Spirituality was inextricable from the man; he meditated and prayed throughout his life. Arabic, Indian, and Japanese sounds seeped into the music he created, often culminating in transcendental albums. Such as in his song "Upper Egypt and Lower Egypt" from the 1966 album Tauhid.

Pharoah Sanders was born Ferrell Sanders in Little Rock, Arkansas in 1940. He started playing church hymns on clarinet, then studied the tenor saxophone in high school. At 19 he moved to Oakland, where he could play professionally.

A couple of years later he headed for New York City, but struggled to find his footing. He was homeless off and on for more than two years, playing when and where he could. His talent was eventually recognized, though, first by Sun Ra, and then by John Coltrane, who asked Sanders to join him for the 1965 album Ascension.

Sanders played extensively with Coltrane during the next two years, on both studio and live albums, touring as part of Coltrane’s final quintet. Interestingly enough, Sanders said on more than one occasion that he and Coltrane didn’t talk much about music during their time together. They were simply kindred spirits figuring out how to best express themselves and trying to live healthy and productive lives.

In the ‘60s Sanders really announced his arrival via a long and fruitful run with the Impulse label, spelling his name Pharoah by that time. His most popular album, Karma, features a 32-minute song called “The Creator Has a Master Plan,” which still holds considerable sway with many young players today.

If ever there was a case study of how you should never pigeonhole an artist for one specific stage of their career, Pharoah Sanders fits the bill.

In the ‘90s, Sanders employed his distinctive tone and technique on many standards – especially ballads. But the roaring intensity of his youth was gone, replaced by elegance and restraint that I imagine only comes from the wisdom of spending so many countless hours with one’s instrument. Critics who were into free jazz always championed Pharoah’s avant-garde beginnings, but there were plenty of writers deferential to straight ahead jazz who dismissed that early work as screeching noise. Well for those critics, Pharoah’s recordings in the ‘90s forced a serious reassessment.

In 2016, the National Endowment for the Arts honored Sanders as one of their “Jazz Masters.” And in 2020, at the age of 80, Sanders recorded an album with the electronic music producer Floating Points and the London Symphony Orchestra, called Promises.

In a 1995 interview on NBC, Sanders said he wasn’t a technical or intellectual player; his focus was on expression. Rest in power, Pharoah Sanders, and thank you for expressing yourself in a way that pleased a wide range of listeners in the jazz world – as well as other genres – over a probing six-decade career. 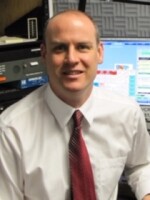 Carl Pogue
Carl Pogue fell in love with radio ever since getting a degree in the field over three decades ago. He’s spent his entire working career at commercial and public stations, with stops in Portland, San Diego, as well as NPR’s furthest affiliates on the Micronesian islands of Guam and Saipan.
See stories by Carl Pogue