The stage illuminates a man with a thick British accent asking the audience for a letter. Murmurs of the alphabet are heard from the spectators with ‘S’ being the most prominent. The man asks for two Jane Austen-esque words that start with the letter.

After hearing the roars of s-words from the audience, the man utters two words:

These words continue to be the central themes of the afternoon play. The lights went dark and a spotlight shined on a woman in a sunshine yellow gown at center stage, performing a monologue in old English. The protagonist seamlessly incorporated the play’s new theme into the aside as if the words were pre-rehearsed and not at all decided two minutes earlier.

Austen Unbound is an improvisational play put on by Book-It Repertory Theatre in Seattle showing at the Center Theatre until Dec. 18. The show is set in the Regency era and is based on the work, style, and wit of prolific writer Jane Austen.

According to managing director Jeannine Clarke, there’s little structure to the play. Every show is unique, with each being the first and last time that the specific play is performed. Even the protagonists and suitors rotate in every show.

“If you were to come back Wednesday Liz wouldn't be the lead,” Clarke said, referring to the actor who performed in this particular show.

What remains constant is the Austen inspiration: monologues, a female-presenting protagonist, and romance.

The nature of improvisation makes audience engagement crucial to the play. Ooos, awws, and gasps are encouraged.

“Tonight, Randy got booed, which was delightful,” actor Kyle Henick said, referring to one of his colleagues. “That's exactly what you want. If you can get an improv audience to unprompted boo a villain.”

Henick said that kind of energy is unique to improv as the actors and audience create the show together.

“We're all experiencing it at the same time,” Henick said. “The audience, we don't know any more than they do. We're all discovering it together.”

The casting process differs from staged plays as there is no role or scenes to prepare for. Authenticity was prioritized in the auditions, according to Clarke.

Rehearsals also vary in improvisational plays. There are no stage directions or lines to memorize. Instead, the cast learned the particulars of the Regency era: etiquette, dancing, manor houses, polite society, gowns, and more.

Like much of Austen’s literature, there is a chance the play dives into deeper topics.

“She talked a lot about classism, she talked a lot about the restrictions and vulnerability of women during her time,” Clarke said. "We're not gonna have like, you know, drug use or anything that is out of Austen's world. But, you know, Austen did deal a lot with women being taken advantage of and being abandoned and finding themselves in bad situations."

At intermission, one of the actors appeared again asking the audience for another ‘S’ word that would dictate act two. Surreptitious was chosen. The second half was filled with twists, conflicts, a love triangle, and a resolution in the form of a proposal.

“I really liked that you could really see their brains working,” audience member Annie Suh said. “Someone would say something and you could see the actors’ wheels turning in what they would say next. They could predict each other’s thoughts. It seems like they've been working together for a while.”

While some actors have worked together in the past, others had just met. The Seattle improvisation scene has been thriving for several decades, with many actors also being a part of other staged plays and television productions. There is some overlap in casting, but for most actors, this was the first production they had together.

“I think there's a fine line between building that community of artists and making a community that is insular and inequitable and kind of like a monolith,” Clarke said.

Back at the theater, among the lavender walls of a manor house, the woman in the sunshine gown took the hands of her chosen suitor, overcoming the salacious feelings of another.

The lights dimmed and the audience connected with the stage one last time as they applauded with sympathy, understanding that what transposed beneath those lights is now a surreptitious matter between them. 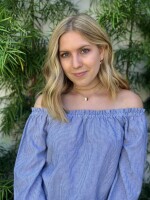 Martina Povolo
Martina Povolo is a senior at the University of Washington majoring in journalism and public interest communications. In her free time, you can find her at local events or reading at a coffee shop.
See stories by Martina Povolo