A bill in the Washington Senate seeks to improve voting rights for Native Americans.

The Native American Voting Rights Act is sponsored by John McCoy, the only tribal member in the state Senate.

“On tribal elections, turnout is really high,” McCoy said during a hearing on his bill Wednesday. “It’s in the 80, 85  percent (range) in tribal elections, but when it comes to the off-reservation elections, it’s down there with what the general public is doing in the low 30’s (to) 25 percent.” 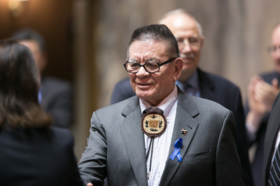 McCoy, a Democrat from Tulalip, says voting needs to be easier for tribal members. The proposed bill would allow tribal members to use their tribal ID cards for voter registration, and they would be able to use non-traditional residential addresses in that process. Tribes could also request the governor designate state facilities on reservations for voter registration. It also addresses ballot pickup and return procedures on reservations.

A companion bill in the state House has been proposed by Rep. Debra Lekanoff, a Democrat and tribal member whose district includes Bellingham and the San Juan Islands.

During the Senate committee hearing, Jacqueline DeLeon presented findings from a study by the Native American Rights Fund. DeLeon, an Attorney with NARF, told the State Government, Tribal Relations and Elections Committee there are a number of barriers to voting rights for Native Americans.

“I don’t think it comes as any surprise to anybody that Native Americans largely live in remote areas,” she said.

Isolation was one among a long list of what DeLeon deemed barriers that keep Native Americans from voting. DeLeon also made recommendations to lawmakers.

“You know, overt overtures to Native populations welcoming them into the voting process I think goes a long way,” she said. “Saying that ‘you are welcome to participate in this system, you are encouraged to vote in this system,’ I think is something that Natives don’t often hear.”

According to the National Congress of American Indians, turnout for registered Native American voters ranges from 5 to 14 percentage points lower compared to any other racial and ethnic group in the U.S.