Big man with big talent got a late start to music. But singing has always been in his blood.

In honor of Black History Month, we are taking a look into the career highlights of African American artists and their contribution to the world of jazz and blues.

A big talent and a big man took a long time to launch his music career. He was close to 40 when he started making records, and within eight years he’d been awarded two Grammy Awards and earned fans all over the world. He has made his mark with compassion and humor and a special jazz hat. Here’s a story about Gregory Porter. It starts in wretched poverty and there is no end to how far he’ll go.

The soulful singer, Gregory Porter, is from the West Coast, not Harlem, and his road to two Grammys and overnight success in radio took him close to his 40th birthday. Singing always had been in his blood, but his 6-foot-3 body kept him in the eyes of football coaches and earned him an athletic scholarship to San Diego State.

One day at practice he dislocated his shoulder.

“Laying on my side and not having the use of my arm, it kind of persuaded me,” Porter said. “I tried to rehab for about eight months, and it couldn’t function, not for football. But it would function for raising my arms and clapping my hands.”

Porter’s music had always been part of his life. His jamming, gigging, playing in clubs and cafes helped continue to develop his chops. When one of his eight siblings bought a cafe in Brooklyn, he moved to the east.

Porter came up in bitter poverty and deep faith. He writes what moves him and you hear it in his voice — the racism he suffered, the buoyancy of his faith, the wisdom of his preacher mother and the absent father that fires his desire to be a better father.

Then, there’s his crown, his topper, his look — his hat.  Gregory Porter wears a unique brimmed balaclava hat that frames his face and his beard in a circle. He says he had facial scars from when he was 7 or 8 years old, but the better story is that it’s his jazz hat. Before his music career took off, he saw it in a store, put it on and he loved it.

Porter’s humor and elegant persona reflects his passion and spirituality. He has absorbed his experiences from times he was treated like dung and lets that live in him. His protests and anger and pain all together pours through the filter of his mind and comes out as beautiful music. 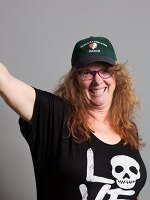 Mary McCann
Mary McCann is a poet and performer and madly in love with music. She?s written three one woman shows and had her poetry published by Arizona State University. Broadcast radio was her life from age 17 on. In 1999 she had a pioneering role in Internet radio during the dot com boom in Silicon Valley. Mary is currently the World Music Director at AOL Internet radio and one of the narrators for BirdNote. She started at KNKX in June of 2008 as the host of the Saturday Jazz Matinee.
See stories by Mary McCann