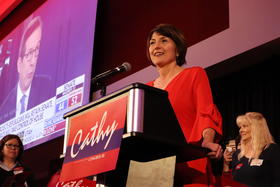 At an election night party in downtown spokane, supporters waved signs and cheered for McMorris Rodgers as she took the stage to give her victory speech. “This election was tough. It was a battle,” she told the crowd. “I stand before you tonight stronger, better and more convicted in what we are fighting for.”

As the crowd cheered, she called “We are fighting for freedom!” She said the country needs unity and ‘healing.’

“... healing of broken families and broken lives, healing for our country as each one of us do our part to build those bridges,” she said.

McMorris Rodgers is the highest-ranking woman in US House leadership. Her seat in Eastern Washington was one of three in the state that had the potential to ‘flip.’ It’s also the only one of those three seats that was decided early and easily on election night.

And while Republicans maintained their majority in the US Senate, Democratic voters managed to chip away at the House, where they will maintain a majority for at least the next two years.

“I remember 1992, Bill Clinton won, Patty Murray won and two years later, we Republicans came back and took the house after 40 years,” he said.

Nethercutt addressed the crowd of Republicans, many wearing bright red shirts and hats, just before Congresswoman Cathy McMorris took the stage to claim her victory The Congresswoman succeeded Nethercutt in 2005.