'They Need To Happen.' Native Women Turn Up The Volume In Violence, Sexual Assault Conversations

According to the National Institute of Justice, four in five Native American and Alaska Native women will experience some kind of domestic violence in their lifetime. It’s a subject that’s long been whispered about. But now, recent headlines about victimized Native women have sparked a larger conversations and calls to action in Indian Country.

Since last January’s Women’s March in Seattle, hundreds of Indigenous women have gathered in the Northwest to raise awareness of those who go missing, are abused or murdered. Now, demonstrations like this are also happening in Alaska’s largest city. 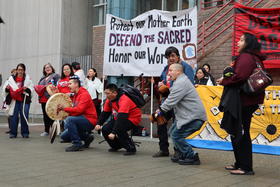 More than a hundred people gathered for a rally in downtown Anchorage last month. They carried signs, some wore traditional Alaska Native regalia.

“This is really hopeful, you know, that we are doing this and we’ve come together under a lot of hurt, you know?” said organizer Charlene Apok. Apok is among the many Alaska Native women publicly sharing stories of domestic violence and sexual abuse.

And women in leadership are publicly supporting their efforts. Including US Assistant Secretary of Indian Affairs Tara Sweeney. “What I can say is having those discussions are painful, folks are vulnerable and they need to happen if we’re going to break this cycle,” she said. Sweeney, who’s Alaska Native, wouldn’t comment on specific federal-level policy changes that might better protect Native women from violence and assault. “What I can tell you, is I am open to working with members of congress on this issue and as policy proposals come forward on this issue, we are open to weighing on those,” Sweeney said.

It’s an issue Congressional candidates are taking on this election season. At a recent debate for Washington State’s 5th District U.S. House seat, Democratic challenger Lisa Brown chided incumbent Republican Cathy McMorris Rodgers. “My opponent voted to weaken the Violence against Women act, specifically to weaken the protections that native women would have on tribal land…” Brown argued. But McMorris Rodgers defended her record. “On the violence against women act, Lisa doesn’t have it quite right. I supported the current policy, that president Obama signed ...” McMorris Rodgers said.

For Kitka, what is new is that conversations about sexual assault and violence against women and children are happening out in the open. “It’s the evolving issue,” she said, “when I first started, this never would have been talked about.”

For now, ending violence against women is mostly a grassroots effort. And notably even Native men, who normally stay quiet about intimate and controversial matters, are now stepping up. At this year’s annual Alaska Federation of Natives convention, Samuel Johns walked around with a petition. 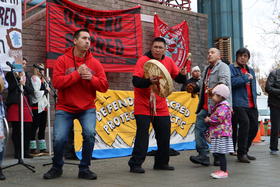 Men who sign the so-called ‘Protector Pledge’ agree only to engage in consensual verbal and physical contact with women and to “disrupt situations where men are harming, harassing or sexualizing women and children.” “Why would I sign something like this?” Johns said, “… because I have three daughters. I have three daughters and I hope that the world is a better place for them."

By the end of the day, Johns had gathered more than 50 signatures.

Whether other men who signed on will stick to their agreement? Only Alaska’s Native women will know for sure.

The FBI is recognizing Coeur D’Alene tribal member Bernie LaSarte for her efforts to combat domestic violence in the Idaho Panhandle.