Construction is underway on the Oregon coast for a new earthquake-hardened marine science building. It will have Oregon's first tsunami vertical evacuation refuge on the roof.

"We're looking at having the building survive not only the shaking of a 9.0 [magnitude quake], but also the potential of a tsunami coming through," Cowen said. "The building has to remain anchored so that the wave doesn't wash it away."

As construction progresses next year, you'll notice a big, broad ramp leading up the outside of the building to a tsunami safe haven on the roof for up to 900 people. The roof will be at a height of 47 feet, safely above the predicted maximum tsunami height at the Yaquina Bay shoreline.

Cowen said interior stairwells will have extra reinforcement and an elevator shaft will be hardened to an exceptional degree. The elevator will have a dedicated emergency generator so that disabled or injured building occupants can get to the roof to escape a tsunami after a major earthquake.

"In Oregon at least, this is the most comprehensive design that I have seen," said OSU Dean of Engineering Scott Ashford.

He noted the new $50 million building was designed to remain standing even if the battering by a tsunami took out one of its concrete and steel support columns. Ashford chaired an oversight committee that reviewed the building plans.

Ashford said the deep cement mixing technique now observable at the Newport construction site is a commonly used mitigation strategy around the world where liquefaction presents a threat. Liquefaction is a technical term for when solid ground turns to jello in an earthquake.

Only one other new building on the Pacific Northwest coast incorporates an engineered, elevated tsunami refuge. It's on the roof of the Ocosta Elementary School gym in Westport, Washington. 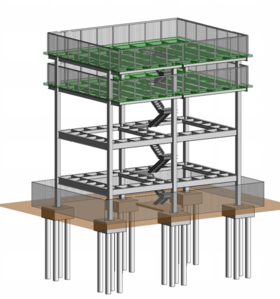 This summer, the Shoalwater Bay Tribe on Washington's Willapa Bay received a $2.2 million FEMA grant to design and build a tsunami evacuation tower for people on the vulnerable Tokeland peninsula. This could end up being the third engineered tsunami evacuation structure on the Northwest coast.

The platform at the top of the Tokeland tower will have a capacity for nearly 400 evacuees. The tribe hopes to break ground next spring.

There was controversy in 2015 when OSU decided to locate its new marine science building in the tsunami zone on soft, sandy soil subject to liquefaction. The state geologist and other experts wrote to the university president at the time to urge OSU to build outside the tsunami zone. The university determined a location away from the rest of the HMSC campus would be impractical, which led to the current beefy building design.

The construction of these vertical evacuation structures does not change the standard advice from emergency managers for coastal residents and visitors to run to natural high ground if possible after the shaking from a major earthquake subsides. People who evacuate to a vertical platform may find themselves trapped and isolated by the surrounding destruction after a tsunami. However, that may be the best option available if natural high ground is too far away to reach quickly on foot.

More people than ever—1.2 million in Washington state and more than 570,000 in Oregon—are registered to participate in the annual Great ShakeOut earthquake and tsunami drill Thursday morning.

Not coincidentally, a Washington state agency is using this week to highlight how the Evergreen State needs to play catch up with neighboring states on earthquake preparedness.

This week, some coastal communities in Washington will have the opportunity to better prepare for tsunamis, among other natural disasters. Workshops with Washington State Emergency Management officials are planned for coastal towns that could be at risk if a tsunami strikes.