A student is dead and three are in serious but stable condition after a shooting Wednesday morning at Freeman High School in Freeman, Washington, near Spokane.

A student told reporters that a male schoolmate had brought two guns to school and fired one of them at the beginning of the late-start school day at 10:15 a.m. Spokane fire chief Brian Schaeffer said the suspect was "taken down safely" and is in custody of law enforcement.

Schaeffer said the deceased student's body remained in the school late Wednesday morning during an investigation.

According to Spokane County Sheriff Ozzie Knezovich, the student killed in the shooting tried to stop the shooter from carrying out his attack.

“He proceeded to take his weapons out,” Knezovich said. “At that point he attempted to fire one weapon, it jammed. He went to his next weapon, a student walked up to him, engaged him and that student was shot.”

Knezovich said after killing the first student, the shooter opened fire on three more students. They all survived and are hospitalized in serious condition. The sheriff says a school staff member took “courageous” action to stop the shooter but did not go into details.

The Freeman area is agricultural, with seed, hay and grain as major crops. Freeman High School had held a lockdown drill on Tuesday. 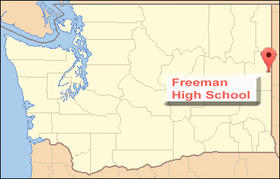 Wednesday morning traffic was backed up for at least a mile on a highway leading to Freeman High as parents rushed to reunite with their children.

William Benson is the stepfather of two students at Freeman High School. He said he got a text at 10:30 Wednesday morning from his oldest stepson saying he was in lockdown, but OK. As of 11:30 Benson said he had not yet heard from his younger stepson.

He said as a former Marine he was trying to stay calm.

A short while later Benson was able to confirm his younger stepson is OK as well. Benson’s wife works at a nearby elementary school in Rockford and was also in lockdown.

Paul Dashiell had just finished dropping off his grandchildren off at an elementary nextdoor to Freeman High School. He was sitting at the nearby Harvest Moon Restaurant with a friend, watching the live TV news.

“Everybody knows everybody up there,” he said. “I graduated there in ‘68 and this is the first thing we’ve had like this.”

Dashiell fretted over his two grandchildren six-years-old and eight, who were still at school Wednesday morning. But said he couldn’t go yet because Highway 27 is so backed up.

"I’m upset that these types of things have to happen -- it’s ridiculous,” he says. “My sons are working the ranch and my daughter-in-laws are working so I’m going to have to go get the kids here.”

Dave Neal is a teacher in a neighboring school district, but his daughter is a freshman at Freeman High. He said she saw some of what happened.

“My daughter said he was all in black, she saw him—had the rounds, took out the gun, loaded the gun and as soon as she saw that, she went into the nearest classroom,” Neal said. “Three of her friends were shot.”

Due to a reported shooting near Freeman High School, all southside SPS schools are currently in lockdown. Updates as information allows.— Spokane Schools (@spokaneschools) September 13, 2017

CORRECTION 10:40 - All SPS schools are in full lockdown as a precautionary measure. Click for definition of terms: https://t.co/SgjGt1tPsC— Spokane Schools (@spokaneschools) September 13, 2017

#BREAKING: Police are on scene of a shooting at Freeman High School in Spokane County, Washington pic.twitter.com/NINQQnirM0.— BreakingNNow (@BreakingNNow) September 13, 2017

More on this story as it develops.