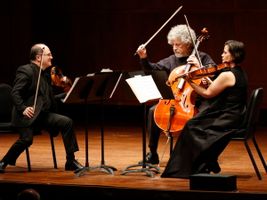 Violins of Hope is a unique project inspired by a private collection of violins, violas and cellos lovingly restored over the past two decades by Israeli violin maker Amnon Weinstein. The instruments all belonged to Jews who played them before and during the Holocaust. Many were donated by or bought from survivors; some arrived through family members and many simply carry Stars of David as a decoration and an identity tag declaring: “We were played by proud people.” These precious instruments can now be heard again even though their former owners were silenced. Music of Remembrance brought a quartet of the Violins of Hope instruments to Seattle for a special narrated concert at Benaroya Hall on March 1, featuring the core members of the Music of Remembrance ensemble, all members of the Seattle Symphony. These artists performed on the Holocaust-era Violins of Hope instruments in a program of music by composers lost to the Holocaust. The Violins of Hope visit in 2020 marked an important milestone, 75 years after the defeat of the Third Reich. Even as the number of living survivors continues to dwindle, Violins of Hope helps to keep stories and memories alive.