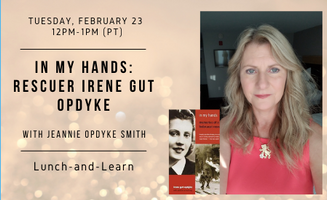 Jeannie Opdyke Smith shares her mother's incredible journey of courage and resilience. A true story of how one Polish Catholic teenager saved over a dozen Jews during the Holocaust. Irene received international recognition for her actions during the Holocaust while working for a high-ranking German official. Irene's story became a Broadway play in the nationally acclaimed production "Irena's Vow" and her memoir, "In My Hands" is used in classrooms across the country. The Israeli Holocaust Commission named Irene one of the Righteous Among the Nations. She was presented with the Israel Medal of Honor at Jerusalem's Yad Vashem Holocaust Memorial. Jeannie is a recipient of the 2015 Civil Rights award given by the Anti-Defamation League. She resides in Washington state with her husband, Gary, and is the mother of three, a foster parent, a grandmother of five, and surrogate mother to dozens more. Jeannie travels sharing her mother's story with groups across the U.S., Canada, and the U.K. The story she shares speaks to the horrors and hate of the Holocaust—but also brings a message of faith, love, and hope, that good can triumph over evil. It proclaims the conviction that one by one, we can say no to hatred, persecution, and prejudice.