ARTHUR MILLER’S (divine) Comedy The Creation of the World ….and Other Business | KNKX
Listen Live

ARTHUR MILLER’S (divine) Comedy The Creation of the World ….and Other Business 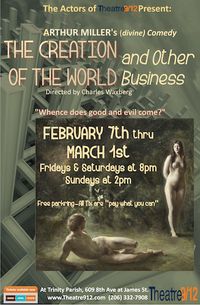 The actors of Theatre9/12 are excited and energized to present a comedy by one of America’s greatest playwrights that provokes discussion of the very root of our current political situation.  The news tells us what happened; this play challenges us with "why?" We are producing Arthur Miller's The Creation of the World and Other Business.  This is his comedic yet incisive retelling of Genesis from the creation of humanity until their expulsion.  However, the play is an exploration of mankind's choices and asks the question: Where does evil come from? Originally staged on Broadway with a “Borscht Belt” style played up for silliness, the production did not succeed as its great ideas were sacrificed for laughs. Subsequent productions in New York City, D.C., and Canada have proven this rare comedy by this multi-award winning playwright is a hidden treasure. For more information visit www.theatre912.com