Race To Unearth Civil War-Era Artifacts Before Developer Digs In

About a dozen archaeologists in downtown Columbia, S.C., are focused on a 165-acre sliver of land that was a prisoner of war camp during the Civil War. Last summer, the property was sold, and the group is trying to recover artifacts before a developer builds condos and shops there.

"We're out here to salvage what we can in advance of that development," says Chester DePratter, a University of South Carolina archaeologist. Time is running out: DePratter and his team have a permit to excavate until April 30.

More than a thousand Union officers were imprisoned here during the winter of 1864. The site had been an exercise yard for patients at a mental health asylum, so the prison quickly became known as Camp Asylum.

Gen. Sherman was conducting a scorched-earth attack on the South, and DePratter says the Confederacy moved the prisoners around a lot to avoid Sherman's march.

"When they were let in through the gates here on Dec. 12, 1864, most of them had just a single blanket," says DePratter. "Their only option to get out of the wind and the cold, for many of them, was just to dig a hole in the ground."

These holes are what DePratter and his team are looking for, hoping to find anything the Union officers left behind.

Archaeologist Heathley Johnson is about waist-deep in a hole that workers discovered a few days earlier.

"I found a lead bale seal for like a bale of cotton or goods. And I've found another little piece of lead that looked like it had been flattened and folded over," says Johnson. "So they were just either idly carving on it or perhaps making a gaming piece or a chess piece."

They've also found some buttons, some combs and a piece of bright blue uniform fabric.

About 56,000 soldiers died in prisons during the Civil War, but only one prisoner died at Camp Asylum. Joe Long, a curator at the South Carolina Relic Room and Military Museum, suspects that the time of year could have had something to do with the low death rate.

"It was winter and that definitely meant the danger of exposure and hypothermia. But disease did not spread quickly in those months," Long says. They did what they could to keep their spirits up, he says.

"There was a glee club at the camp," Long says. "The informal rule was you could sing all of the Federal or Yankee songs that you want, but you have to balance each one with a Confederate song."

Archaeologists have pored over diaries and letters from the prisoners, but most of them talk about the weather, lack of food and missing their families, rather than their possessions. There is very little information about what the Union prisoners might have left behind. So DePratter and his team dig. Sometimes the unexpected turns up.

"I just found this," says archaeologist Chris Parker, holding a small object in his hand, about 2 inches long. He's grinning.

"This is an interesting piece. It's not from the prison period," says DePratter. "This is a piece of flake stone, probably thousands of years old, from Indians who lived here on the site long before the prison was here. It's probably a knife."

There is no telling what these archaeologists might find, but by the end of April, this project will be over, developers will be in to build condos, stores and perhaps even a baseball stadium, and any artifacts remaining underground will be buried. 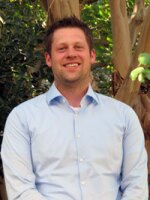 Kevin Kniestedt
Kevin Kniestedt became the host of Morning Edition on WFAE in September of 2013. Prior to that, he spent twelve years in public radio in Seattle/Tacoma and Spokane, Washington, where you could find him on the air just about any random hour of the day. Kevin has spent time hosting both news and music, has interviewed the likes of Dr. John, Chick Corea, and Branford Marsalis, and has authored the list 1,000 Jazz Albums You Should Hear Before You Die. Kevin is also a huge sports fan, loves a good film festival, and can often be found indulging on a massive plate of nachos.